The Origins of Bluegrass Music: A True-grass History 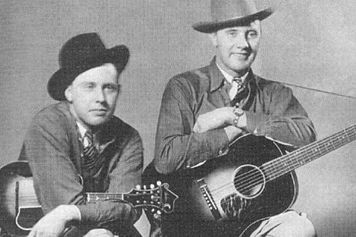 Like biscuits and fried chicken on Sunday afternoon, there were magical moments in the origins of bluegrass music, when two great things came together.

A Fateful Night
Such was the occasion when sometime around 1926 or ’27, a teenager named Bill Monroe was afforded the opportunity to play with Arnold Shultz for a local barn dance in Rosine, Kentucky.

“One time they [Arnold and his family] was up around Rosine, and they [the townsfolk] wanted us to play for a square dance there, so Arnold played the fiddle and I played the guitar.”— Bill Monroe

Arnold Shultz was a black, old-time, blues, and ragtime musician from Ohio County, Kentucky. He and his family were coal and dock laborers who traveled all over the South looking for work. Wherever they went they brought their music along.

Arnold was well known for his innovative guitar picking style, in which he played rhythm, bass, and melody by thumbing the bass strings while picking the other notes with his other fingers. He was a major influence for players like Kennedy Jones, who first saw Arnold play back in 1918. Jones then taught the style to other guitar players, who in turn influenced the great Merle Travis.

Merle developed the techniques further to become famous as the ‘Travis picking’ style. It would become the dominant style of country guitar playing in the mid-20th century, and essential for the development of the bluegrass style.

It was Arnold Shultz himself who gave Bill Monroe one of his first, if not his very first, professional gig that night back in 1926-7. And Bill never forgot it, nor did he forget the virtuosity of Arnold’s guitar playing:

“There’s things in my music, you know, that come from Arnold Shultz—runs that I use in a lot of my music. I don’t say that I make them the same way that he could make them ‘cause he was powerful with it… I tried to keep in mind a little of it—what I could salvage to use in my music. Then he could play blues and I wanted some blues in my music too, you see.”— Bill Monroe

The Origins of Bluegrass: A Southern Recipe
Fried chicken and biscuits don’t drop out of the sky. There’s a recipe, and the origins of bluegrass music is no different.

There’s little argument that Bill Monroe was the BBQ master of bluegrass, but the ingredients he brought together run deep and far back into the history of the country. Like real BBQ, smokin’ up a new music genre is a ‘low n slow’ process.

Stockin’ the Pantry with Bluegrass Ingredients
Before Bluegrass, there was Hillbilly Music, and before that: string bands, gospel, ragtime, minstrel shows, and the blues.

All these musical genres traveled on the backs of people coming into Appalachia from the 18th to the early 20th centuries. Along with their meager belongings they carried their musical traditions, their culture, and their soul.

This process began in the early days of the country, when it was still a loose group of colonies. Scots, Irish, and English settlers pushed into the wilderness of the Appalachian Mountains, bringing with them their hymns, ballads, reels, jigs, and folk songs.

African Americans came from all over the South, bringing their culture and talents to the smoky mountains of Appalachia.

Everyone brought their instruments.

The fiddle came first, with the English, Scots, and Irish immigrants in the 18th and 19th centuries. It was lightweight, compact, and the go-to instrument of their traditional European folk music.

The banjo, introduced to America by enslaved Africans became a popular compliment to the fiddle in the 19th century. In the latter part of that century, black blues musicians also brought the guitar to the region. These three ingredients came together to form mountain string band music, a genre still popular when Bill Monroe first learned to play the mandolin, the fourth ingredient.

Vocals are of course an important element of bluegrass music. And in that regard, religion played an integral role.

Gospel music was the bedrock upon which bluegrass grew. Nearly every bluegrass musician will admit they learned to sing in church and the old time revival tents that came to town, where they sang hymns and spirituals, usually a cappella. The close harmonies of the church became the soulful, note-bending vocal stylings of bluegrass.

“Well, I used to hear them singin’ in churches, ya know. They had tenor singers…and the ladies would be singin’ the alto. My brothers, they all went to the singin’ school in the church.”— Bill Monroe

The Father of Bluegrass: Bill Monroe
Young Bill had a hard life. By the time he was 16, in 1927, his parents were both dead. His brothers had moved up north to look for factory work, so he followed them. Soon after, he joined their little family string band, playing mandolin, because the rest of them had already claimed the primary instruments.

After his brother Birch and two other members left the group, Bill and his brother Charlie continued as The Monroe Brothers. They recorded together under that name, but eventually split up. Bill wanted to do something different with the music. He had dreams of something new.

In 1938, he ended up in Atlanta, Georgia where he formed the first line up of Bill Monroe and the Bluegrass Boys. The original members were Cleo Davis as lead singer and guitarist, Art Wooten on fiddle, and Amos Garren on bass.

According to Bill, the audition went just fine: “So I’d done about a couple or three songs, and they said, ‘Start this comin’ Saturday, and if you ever leave here you’ll have to fire yourself.”

The stage was set for a musical revolution.

But while The Bluegrass Boys bore the name of that future movement, their sound was still well within the boundaries of country music. They were good old mountain biscuits. They played a bit faster, added some blues elements, but for the most part, they were an old-time mountain, hillbilly string band with a singer. There was still an ingredient missing.

We’ll continue the story in the next episode, where the new version of Hillbilly Music becomes a true music genre of its own, when the spicy fried chicken joins the biscuits if ya will…

Want to know more about the history and origins of bluegrass? Check out these resources: