Rock n Roll, Country, and the Emergence of Bluegrass 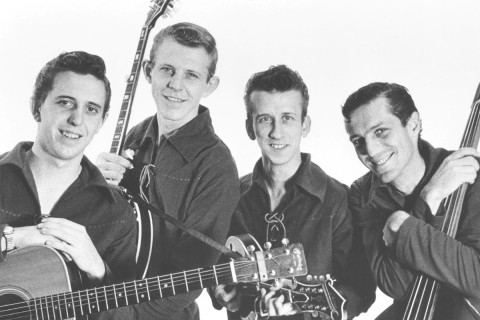 That’s just as true for the history of bluegrass music, as it is for music as a whole. In fact, there really was no plan.

Bill Monroe had no plan, as a teenager, to meet and play with Arnold Shultz, any more than he planned to create an entirely new genre of music. He was just playing good ol’ hillbilly country music, in his own way.

Earl Scruggs was about to quit playing banjo to go home to take care of his ailing mother, before he was discovered by Monroe.

Ricky Skaggs was only 6 years old when his family and friends managed to get him on stage with the great man, Monroe, himself. Ricky was too young to have a plan; Bill, unaware of what he’d set in motion that night.

And when the Osborne Brothers decided in the early 60s to plug their acoustic instruments up to amplifiers, throw in some drums and an electric bass, it wasn’t part of a grand design. They were just going with the flow of history, and of music.

Big things were happening beyond their control, beyond anyone’s control…

By the early 1950s, bluegrass music was catching on.

The first generation of pioneers were still cranking it out. Monroe was still on the stage at the Grand Ole Opry.

Flatt and Scruggs were still whipping up a bluegrass frenzy with the Foggy Mountain Boys.

Things looked pretty good for the future of a genre that still didn’t officially have a name, though the name was being bandied about.

But then something happened no one could have predicted.

In 1951, Alan Freed, a disc jockey on WJW in Cleveland, borrowed the term ‘rock n roll’, to describe a new style of emerging music.

It wasn’t really new. Fats Domino pointed out, correctly, that it was really just rhythm n blues, which he’d been playing for more than fifteen years down in New Orleans. But by 1951, new, especially white, artists were getting in on it, and young people in particular, were hitchin’ their ears to the new sound.

Then Elvis came along…

And the rock n roll doors were blown wide open.

It was soon on radio stations everywhere.

Some stations switched over from country music to play it.

All of a sudden, country music had to compete with a new threat to their position in the marketplace.

As the new craze took off, country singers and songwriters scrambled to compete for air time, and stage time. Many incorporated elements of the new style into their own music.

Country music would never be the same.

The biggest change rock n roll brought to country music was the volume: via electrical amplification.

Country bands began to electrify their instruments and plug into more powerful amplifiers. They added drummers. They attracted bigger and bigger audiences. The radio stations gave increasing preference to this new country sound over the old fashioned, acoustic sound they once embraced.

Bluegrass musicians resisted the changes and a rift opened up as a result.

Bluegrass bands found it harder and harder to compete with the big sound of the new country artists and the popularity of rock n roll. Increasingly, they were relegated to playing small venues and bars. They had to travel further to make a dollar and the dollars were scarcer.

Even the father of bluegrass, himself, Bill Monroe, struggled to sell records and keep his band together.

A New Home in the Folk Revival 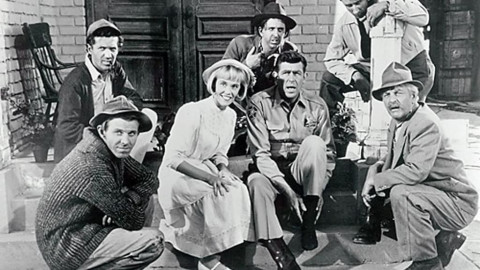 But at the same time, a new movement was also catching on: the folk music revival. Coming out of the counterculture movement of the late 50s, and into the early 60s, there developed a longing for the ‘old ways’ or ‘old styles’ of music and art.

Folk singers like Bob Dylan and Pete Seeger were discovered, or rediscovered, and given a new stage to perform the old songs of the past. It was this movement that also brought bluegrass back to the public eye.

Due in part, no doubt, to this new folk movement, Flatt and Scruggs hit it big with their ‘Ballad of Jed Clampett,’ on the hit TV show, The Beverly Hillbillies. And thanks to the hit Any Griffith Show, the Dillards—masquerading as the ‘Darlins’—brought the bluegrass sound to the living rooms of millions.

The revival also took place on college campuses. The first ever bluegrass concert on a college campus took place in 1960, when Antioch College in Ohio, invited The Osborne Brothers—one of which, Sonny Osborne, had played a stint with Monroe in the early 50s—to play a concert in Kelly Auditorium.

“We didn’t know what to expect, to perform for a college audience,” Bobby Osborne recalled in an interview.

They decided to open with a few current, country songs.

“We got some ‘golf applause,’” Bobby said.

The concert organizer pulled them aside and said, “Do some mountain music!”

“We came back out and broke into ‘Little Maggie,’ and ‘The Salty Dog Blues,’ and tore the place down!”

As part of this folk music revival, promoters began to hold festivals, usually in the open air, under tents, and in the countryside.

The first one dedicated solely to bluegrass, however, was in Luray, Virginia in 1961, where Monroe, the Stanley Brothers, and others performed to a large audience.

In 1965, Carlton Haney, who had attended the first festival in Luray, promoted the very first, multi-day bluegrass festival in Fincastle, Virginia. On the bill was Monroe and his Bluegrass Boys, Don Reno & the Tennessee Cutups, Red Smiley, The Stanley Brothers & Clinch Mt. Boys, along with Mac Wiseman and Doc Watson.

The Osbornes were listed but could not attend the first one, due to contractual obligations elsewhere, but made sure to be there the next year, in 1966.

These new festivals gave bluegrass bands a new venue to reach their small audience, where they didn’t have to compete with big country acts, or rock n roll.

But festivals and bar gigs weren’t enough to pay the bills. That’s why bands like the Osbornes decided to ramp up their sound…

In the 50s and early 60s, Bobby and Sonny Osborne and their band faced the same challenges of their bluegrass peers. The gigs were scarce, didn’t pay much, and there was little space on the radio for their style of music.

That’s when they decided to adapt, or die.

They electrified their sound.

They added pickups to their acoustic instruments and ran them through electric amplifiers. They also added drums.

“It was the only way you could compete, sonically with the other bands! Because you’d have a country band come on, first, then us, then George Jones. And if we hadn’t been electric, we’d have sounded [tiny].” Glen Duncan, fiddle player for the Osborne Brothers.

The Osbornes, much as they caught hell for their electrification in the 1960s, rolled on to massive success.

By the end of the 50s, they had already racked up several hits, ‘Ruby Are You Mad,’ ‘Once More,’ ‘Sweethearts Again,’ and ‘Fair and Tender Ladies.’

In the 60s, they signed with Decca Records, and were inducted as members of the Grand Ole Opry.

When the genre finally, officially locked in on its name, no one really knows for sure. In the 40s it was still part of ‘country and western’ music. Some time during the late 1950s ‘bluegrass’ became a semi-official name for the genre, though it wasn’t listed as such in the Music Index until 1965, but only to direct readers to “see Country Music: Hillbilly Music.”

And so it remained until 1987, when the Bluegrass finally received its own listing.

By the time it emerged as its own genre, bluegrass music had been forged into something new. While it remained largely true to its roots in acoustic, mountain, folk music, new artists had pushed it in new directions. And no one knew how far it would go.

But that’s for next time…

If you’d like to know more about this topic, here are some resources:

Explore more in this comprehensive article about the History of Bluegrass