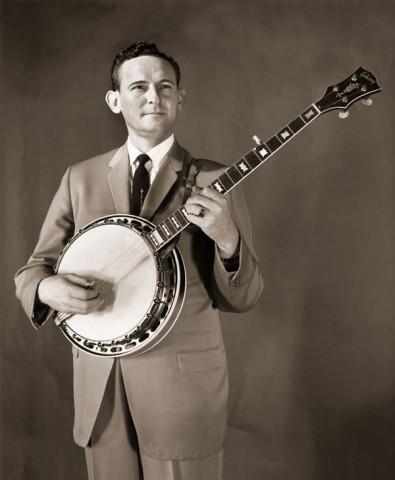 In 1960, Bill Monroe found himself faced with an enthusiastic crowd in Martha, Kentucky. He and his Bluegrass Boys were playing a gig at the local high school.

In between songs, the crowd implored Bill to “let little Ricky play!”

This went on and on for some time. Bill finally gave in:

“Well, where is this little Ricky?”

The audience, mostly family and friends of the boy, pushed a tiny lad to the edge of the stage…

“Bill looks down at me… grabs me by the arm and lifts me on to the stage.”

Bill slipped his full-sized mandolin from his shoulder, wrapped the strap around a couple times so it would fit the boy and put it over little Ricky.

Young Ricky launched into his version of the Osborne Brothers’s tune, as if he were born to the stage.

According to Ricky, Bill pretended to be annoyed, looking around as if he were simply waiting for the boy to finish.

When Ricky came to the end of “Ruby,” Monroe retrieved his mandolin, struck the strings about three times, then turned to the mic: 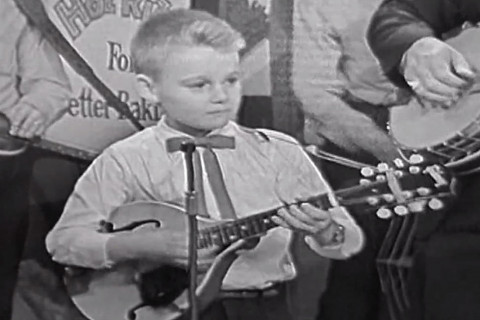 But the legend of little Ricky Skaggs and Monroe’s mandolin were engraved into the history of bluegrass.

By the next year he was a guest of Lester Flatt and Earl Scruggs on the Grand Ole Opry, cementing his branch on the bluegrass family tree.

Little Ricky went on to become one of the great bluegrass and country musicians of all time.

But he was not the first, or the last, to add a branch to that tree.

Monroe would be for years, the center of the genre he had created. Countless musicians got their big break in the ranks of his Bluegrass Boys, coming in to fill gaps in the band over the years and decades.

There are few bluegrass musicians who can’t trace a link back to Monroe. Even if they never played for him, they were all influenced by him, directly, or indirectly.

When we left the story last, Bill Monroe had unleashed a new style of country music upon the world when he completed the transformation of his Bluegrass Boys, with the addition of Lester Flatt and Earl Scruggs.

Scruggs’s innovative banjo picking style elevated the hillbilly sound to something new, what would eventually be called ‘bluegrass.’

When he and Flatt left the band and formed their own, they gave birth to a new genre, even though it still didn’t have a name.

Their departure left a huge gap in Monroe’s lineup. He quickly filled the spots, except for banjo. Scruggs was a hard act to follow.

One of the countless musicians who filtered through the ranks of the Bluegrass Boys was a young man named Don Reno.

Reno, much like ‘little Ricky’ began playing at the age of five. He started out on the banjo, then went on to master the guitar as well, known for his innovative mix of jazz and blues and a two-fingered banjo technique.

In 1943, Bill Monroe offered him a job in his band, but Reno enlisted in the army to fight in the Pacific, where he served in the famous Merrill’s Marauders, and was wounded.

After the war Reno returned home where he played for several different groups in his home town of Spartanburg, South Carolina.

In 1948, he heard about Earl Scruggs’s departure from the Bluegrass Boys, so he headed to North Carolina, where Monroe and his boys were scheduled to play.

Not unlike ‘little Ricky,’ Reno came prepared to make a splash.

During one of the Bluegrass Boys’ sets, Reno jumped on stage and joined in on banjo. The bold move won him the job. He stayed with the Bluegrass Boys until the next year, when he was struck with a case of malaria and had to leave.

Later that year, 1949, Reno got a call from another group, one of his early influences: Tommy Magness and the Tennessee Buddies, from Roanoke, Virginia. He took the offer and that’s where he met Red Smiley.

Red Smiley was the guitar player for the Tennessee Buddies at the time. He and Reno hit it off.

Smiley began playing guitar early, around the age of seven, supposedly after being inspired by the playing of two ‘hobos’ he saw playing one day.

Like Reno, Smiley also joined the army during World War 2. After the war he went to school to learn diesel mechanics in Nashville, Tennessee. That’s where he saw Don Reno on banjo for the first time, playing with Monroe on the Grand Ole Opry.

Now they were in the same band.

When in 1951, their boss, Tommy Magness retired, they joined another band, Toby Stroud’s Blue

They recorced one song together, as a duo in 1952, but then took different paths, until in 1955, they were again asked to join together for a live show in Richmond, Virginia. Not long after, they formed their famous Tennessee Cut-Ups.

Their fame grew throughout the southeast.

So much so that in 1956 they were recruited for a weekday morning country music TV show in Roanoke, Virginia, called Top o’ the Morning.

They didn’t tour much during that period, due partly to the TV show schedule and partly to Reno’s health.

Over the next eight years, they racked up a string of hits, including “Don’t let Your sweet Love Die,” “I Wouldn’t Change You If I Could,” and “I’m Using My Bible For A Road Map.”

They separated in 1964, though Reno kept the band.

They came together a few times over the following years, until Smiley died in 1972, at only 47 years old, due to complications from diabetes.

Monroe’s Bluegrass Family Tree continued to grow over the years, spawning and influencing other budding musicians, until it was a Smoky Mountain forest.

Reno and Smiley, like Ricky Skaggs, were just a couple of branches on that tree. While they were fabulous musicians in their own right, they all took shade under Monroe’s branches.

Want to know more about the history and origins of Bluegrass?

Check out these resources:

Reno and Smiley, “Talk of the Town,” https://www.youtube.com/watch?v=AcilfYyxF_0