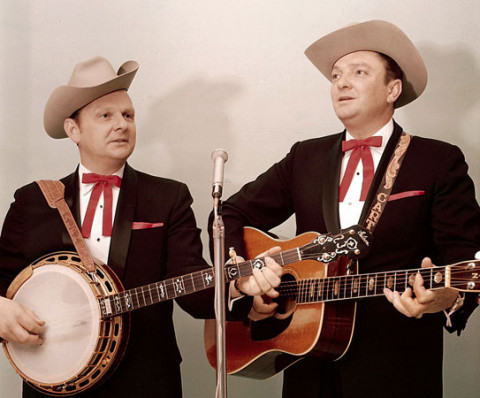 One night in 1969, Ralph Stanley was racing to a show in Louisa, Kentucky.

One of his tires blew out. He was gonna be late.

When he finally made it to the show, he heard singing, and the ring of a mandolin.

“They sounded exactly like us!” he told an interviewer many years later.

When he entered the venue, he found Ricky Skaggs and Keith Whitley on stage, strummin’, pickin’, and singin’ their hearts out.

“They were holding the crowd till we got there!”

Even though they were only about 16 or 17 years old, Ralph added them to his band.

“I saw potential in them.”

This is the story of how Bluegrass Music came to be, and how the genre, in its early days, and to this day, is very much a ‘family’ thing, with all that families entail: good and bad.

Ralph Stanley, like Bill Monroe, grew up in a musical family. Though his father never did play an instrument, he often sang old timey gospel songs, or mountain classics like “Man of Constant Sorrow.”

His mother’s family, however, was chock full of musicians. She had eleven brothers and sisters, and every one of them played the five string banjo, claw and hammer style.

And that’s where Ralph learned to play, from his mother, aunts, and uncles, though he developed his own style over the years.

“I got my first banjo when I was a teenager. I guess I was 15, 16 years old. My aunt had this old banjo, and Mother bought it for me … paid $5 for it, which back then was probably like $5,000. [My parents] had a little store, and I remember my aunt took it out in groceries.”

Ralph’s older brother, Carter, began playing music about the same time. When they were younger, they used to sit around the radio listening to the Grand Ole Opry, and ‘air-banding’ along with the music.

They were big fans of Bill Monroe and the Carter Family, who lived not far from them.

“Before we had instruments, Carter and I used to take sticks and act like we were playing along, you know—never did get a sound out of it.”

Both boys were born in Big Spraddle Creek in Virginia, but grew up nearby in Dickenson County.

When the U.S. entered the Second World War, Carter joined the army.  Ralph joined up just as soon as he graduated high school in May of 1945, just in time for the end of the war.

But as soon as he got home, he was right into playing again.

His dad and brother came to pick him up from the train station. Carter had already been home and had joined up with Roy Sykes and the Blue Ridge Mountain Boys, who just happened to have a gig that night on a local radio station.

The Stanley’s drove straight to the station for the gig.

“I sung a song with Carter on the radio before I even got home. The next day, I joined the band, stayed with them about three weeks. But I wasn’t satisfied. Something didn’t feel right. So I told Carter that if he wanted to start up a show, start up a band, together, that was fine. If not, I was going to start taking a course…”

Ralph was considering studying veterinary medicine. He’d always loved working with animals. But Carter liked the idea of forming a band with his younger brother, so Ralph never did become a vet.

The Stanley Brothers and the Clinch Mountain Boys, as they called themselves, quickly made a name for themselves, based largely on their close harmonies.

They soon grabbed a steady gig on a local station, WNVA, but didn’t stay there very long before they landed a better one in Bristol, at WCYB, for a show called Farm and Fun Time. They were on the show, regularly, over the course of the next twelve years.

They began by playing and singing the songs of their idols, especially those of Bill Monroe and the Bluegrass Boys.

“We did a lot of Bill Monroe music when we first started, but we soon found out that didn’t pay off—we needed something of our own. So we started writing songs in 1947, 1948. I wrote 20 or so banjo tunes, but Carter was a better writer than me.”

Soon after, they signed a recording contract with Columbia Records. This is when the newly emerging Bluegrass ‘family’ had one of its early tiffs.

Bill Monroe and his band were represented by Columbia. At the time he considered the Stanleys economic competition, and their music derivative of his own. There was some truth to the latter, for sure.

Bill told Columbia that if they signed the Stanleys, he would quit the label. They did, and he did. Monroe signed on to Decca. The Stanley Brothers became fixtures for Columbia Records.

“I don’t know what he was upset about,” Ralph told an interviewer many years later, though he grinned when he said it.

Bill eventually got over it, because when the Stanley Brothers split up for a brief time in 1950-51, Bill hired Carter to sing for him.

“Things had got lean, you know,” Ralph said, referring to the period when Rock’n’Roll was on the upsurge and Country Music was slipping in the charts. “And Carter had always wanted to sing with Bill Monroe, so we decided that we’d rest for a few months. So he went off with Bill to sing. He knew Carter would make him a good singer. I also played with Bill a few times back then. He became one of our best friends. That ended all that stuff. I never had a better friend than Bill Monroe.”

It seems the music, in the end, was all that mattered.

The Sound and Goin’ Solo

The Stanley Brothers’ sound was based on Ralph’s driving banjo and his tenor singing, but the key was probably Carter’s high lonesome, mournful lead vocals, along with his solid song writing skills.

In 1958, after they signed with a new label, King Records, they moved to Florida where they began playing a TV show, which they did for the next 8 years. This ended when Carter passed away from liver cancer in 1966, at the age of 41.

Ralph was devastated, even though he knew it was coming for some time. Carter seemed to know it, too.

“You know, in his last year, he would go off stage… and just leave me and the band out there, so I had to talk or let it go blank. I believe that he did that for a purpose…”

Ralph continued the music, but admitted it was difficult at first.

“I was worried, I didn’t know if I could do it all by myself. But boy, I got letters, 3,000 of’em, and phone calls—people told me, ‘We’ ve been Stanley Brothers fans through the years, now we’ll be yours.’ And that really helped me.”

It was just a couple years later, when he had that flat tire and discovered Ricky Skaggs and Keith Whitley.

Ralph continued to perform, year after year, racking up fame and fortune, but in 2000, he rocketed to a new level when he was recruited to sing “O Death” for the soundtrack to the movie, “O Brother, Where Art Thou.”

“You see, I had recorded ‘O Death” three times, done it with Carter. So I went down with my banjo to Nashville and I said, ’T-Bone,’ [T-Bone Burnett, the producer for the soundtrack] ‘let me sing it the way I want to sing it,’ and I laid my banjo down and sung it a cappella. After two or three verses, he stopped me and said, ‘That’s it!’”

In the larger Bluegrass family, he was known as Dr. Ralph Stanley.

He died in 2016 at the age of 89, after racking up award after award, including induction into the Bluegrass Music Hall of Honor and the Grand Ole Opry, as well as being awarded with a National Heritage Fellowship from the National Endowment for the Arts.

Tags:
The history of the Stanley Brothers of Bluegrass fame broken down
×
Stay Informed